Passing with Runs Variation I

We would like to thank the winning author of this weeks drill of the week for the created graphics and animations. We would also like to thank all other users who use our graphic and animation tools daily but were not selected this week. Please keep on trying! You are the reason why easy2coach becomes awesome worldwide.

Process:
Player E starts the drill from cone II by making a short dummy run away from and then towards the ball. Player D passes him the ball for him to run onto which he passes with his first touch to player A. Player A passes the ball to the player waiting at cone IV and sprints towards cone III passing cone IV on the left side. Arriving at the same cone B passes the ball for A to run onto who passes on to cone I. Player D is now waiting at this cone, having run there after his opening pass to E. From cone I player D passes with his first touch back to A. A controls the ball and takes up the position from D at cone III.

Tip:
Start by running the drill slowly and then speed up. The receiver should always make a small, dynamic dummy run away from or to the side of the ball before receiving the ball. The drill can be extremely tiring when conducted quickly with only four players.
– Under time pressure, this drill is very game realistic.
– The reciever should call for the ball.
– Pass and run timing is important
– Players often run faster than their pass.
– Don’t forget the runs.
– Demand good pass precision.
– Pass precision is more important than pass speed.
– Concentration must be held at all times.
– The players will need a certain amount of time until they have mastered the drill.
– A good touch and passing skills are required.
– Anticipation, awareness, reaction, speed of thought and movement with and without the ball are continuously required.
– This passing and dribbling drill requires a large amount of game intelligence.

Click here to open the drill in detail
We hope that you enjoyed this drill.

We also look forward to new suggestions or requests that you can easily send us as a comment in the blog or via email..

Over 500 public drills are waiting for you

In case you like this football drill, we would be very happy if you could share this one below or if you visit us in www.easy2coach.net. 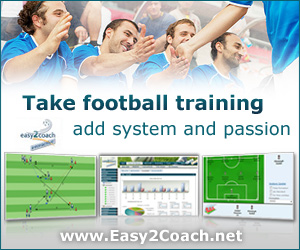